New Zealand’s largest birds probably became extinct within one hundred years of humans first arriving in New Zealand, around 1300 A.D.. However, there were unsubstantiated sightings of moa by whalers and sealers into the 18th and even 19th centuries. Moa were a family of eleven species of flightless birds that were only found within New Zealand. The largest species grew up to 3.7 m (12 ft) tall and weight up to 230 kg (510 lb) – no wonder they were hunted by Maori! They were the only wingless birds known to have existed – even their cousin the flightless kiwi still has little vestigial wings hidden under its feathers. Prior to their extinction, they were the dominant plant-eater in New Zealand’s forests and only had one predator, Haast’s Eagle; the largest eagle ever known to exist and also the victim of extinction following the demise of the moa to hunting by Maori. 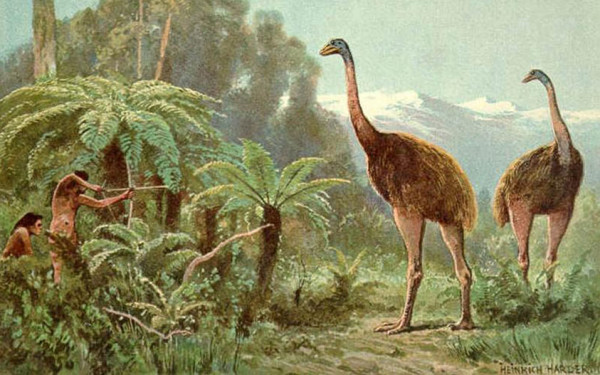 Kiwi were long regarded as the closest relative to the moa, but recent studies suggest that either the Australia emu and cassowary or tinamous birds from South America are likely the closest cousins. Female moa grew considerably larger than their mates and weighed almost three times as much, in some cases. Although most images of reconstructed moa skeletons or artists’ impressions of the birds show them standing upright, it is likely that they actually moved along with their head out in front, just like a kiwi does. Despite almost always being portrayed as giants, some species of Moa were actually significantly smaller, much shorter than the height of a person, and some possibly as small as chickens!

Of course, completely lacking wings the question has been asked “how did the moa get to the islands of New Zealand”. It’s thought most likely that moa were already roaming New Zealand prior to it breaking away from the super-continent of Gondwana about 80 million year ago.

Many moa bones, eggs (including over 30 whole eggs), feathers, dehydrated skin and nesting materials have been found from a number of caves and other locations around New Zealand, in particular from the dry Central Otago region.