The Best Time to visit the Galapagos Islands 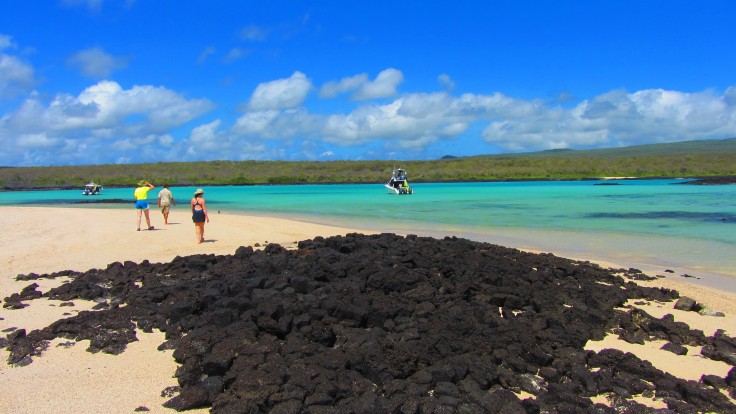 If you’re heading to the Galapagos Islands, you probably can’t wait to get out your sunbathing suit for a swim in the clear, blue waters, or go out to catch a glimpse of the impressive Tortuga’s!

Unlike most other wildlife destinations, the animals here can be seen year-round, with few migratory species and no need to wander off in search of waterholes or food. Also, more than 20% of the marine species in Galapagos are found nowhere else on earth! Therefore, there’s no “wrong” time to visit Galapagos, simply different times of the year have different things to see and do.

The islands have two distinct seasons with the warm/wet season from January to June, the wind can be strong with short periods of rain, though it’s generally sunny and warm. The cool/dry season which lasts from July to December is when water temperatures can be chillier and a misty precipitation known as ‘garúa’ surrounds the highlands. From July to October the seas can be a little rougher, so if you’re prone to sea sickness, it’s best to avoid this time!

The wildlife here is in such abundance and variety! Tropical fish, Galapagos Shark, Batfish, Hammerhead Shark, Tagle and Goleen Rays, Moray Eels, Green Sea Turtles, Stingrays, Barracuda, Triggerfish, Boxfish, Frogfish and plenty more! We have Galapagos Islands Tours year-round, so we can help you pick the best time according to your bucket list.

The Wet Season in the Galapagos

During the wet season from January to June the temperature ranges between 79°F and 86°F (26°C and 30°C).  Characterized by daily rains and cloudier skies, the weather and water temperatures are higher, and the sea is calmer, making it the perfect season for snorkelling or diving.

January is when green turtles lay their eggs and land birds start nesting. Different varieties of Iguana’s will be out and about, with Espanola marine iguanas turning on their bright colours and Isabela land iguanas beginning their breeding season.

February, March and April is breeding or nesting season for many of the land birds, sea lions, turtles and tortoises that you'll find on the Galápagos, and they’ll nest amongst a blanket of blossoming spring flowers. Penguins return to the cooler waters that February brings, and flamingos, Bahama pintail ducks, Nazca boobies and the Galapagos doves begin nesting around this time.

From March, it’s a great time of year for beach lovers as it’s one of the hottest months, although there's every chance of a daily shower, land temperatures are at a high. You can spend hours snorkelling in the comfortable water temperatures, with Punta Vicente Roca, near Isabela Island, an amazing site to explore.

By April, there’s a massive arrival of waved albatrosses and iguana, sea turtle and giant tortoise hatching season begins! This is the start of the best months to visit the Islands with great weather, plenty of wildlife and warm water temperatures. 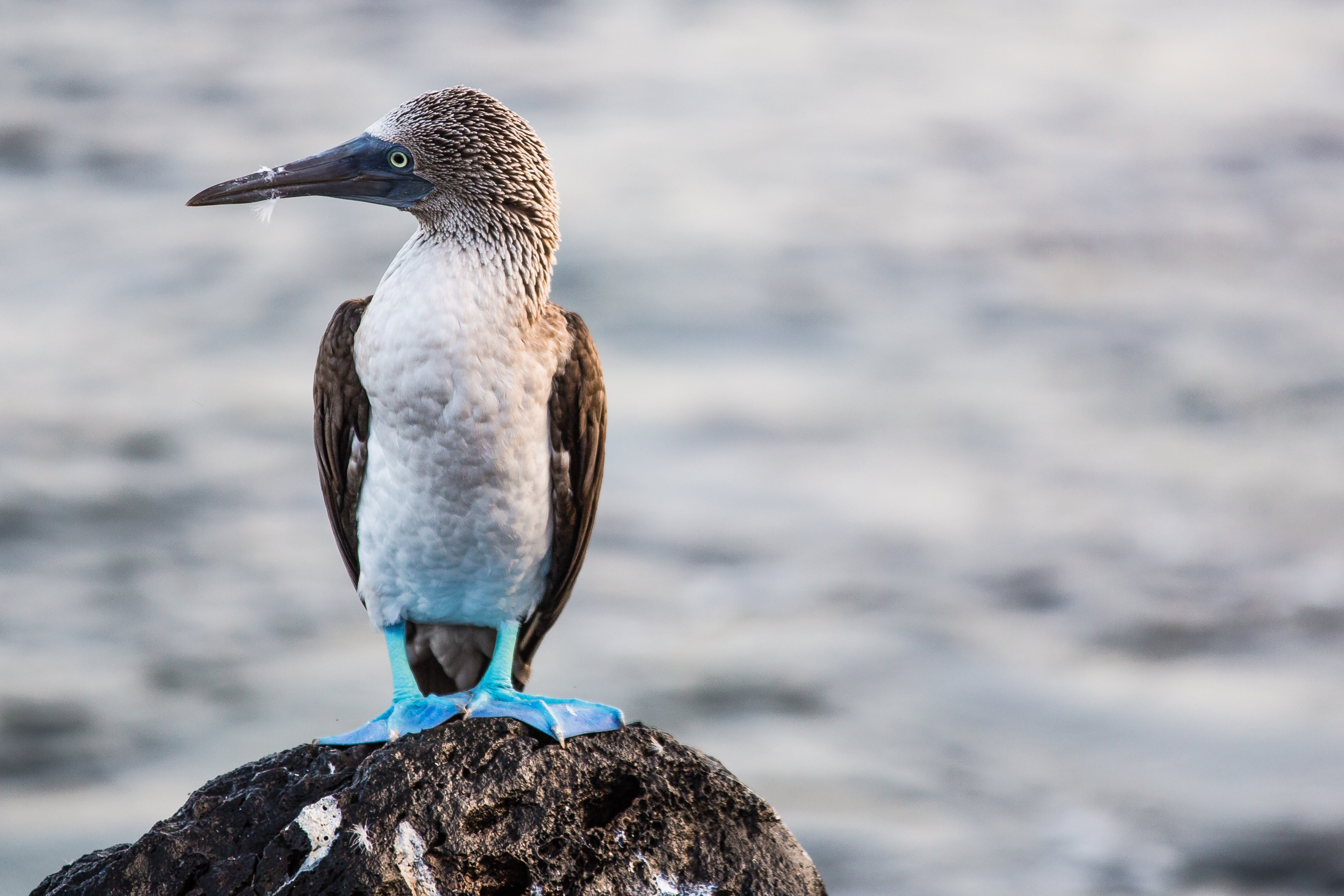 May is when Blue-footed boobies are doing their courtship dance, and the hatching continues at Gardner Bay, Punta Cormorant, Puerto Egas and Santa Cruz. The waved albatross lay their eggs along with the Ban-rumped storm petrels.

June is the end of the wet season and when Humpback whales migrate through the Galapagos. It’s also a great time to see whale sharks off the coast along with Santa Cruz giant tortoises as they migrate down to the lowlands to begin mating season. The magnificent male frigatebirds also start flaunting their red pouches!

The Dry Season in the Galapagos

During 'Garua' or dry season from July to December the temperature ranges between 68°F and 75°F (20°C and 24°C). The days bring blue skies, with little wind and water temperatures tend to get cooler because of the Humboldt current crossing the North of the Galapagos. Air and sea temperature difference creates a layer of mist in the Archipelago sky.

July doesn’t have the best sunshine however this is the mating season for blue-footed boobies (particularly on Isla Española) along with the short-eared owls. Whales & dolphins are more likely to be observed during this time too, specially off the western coast of Isabela Island

August is one of the cooler months and It’s when the Flamingos begin their mating ritual. Frigatebird and booby eggs begin to hatch, Galapagos hawks courtsgip and Nazca (masked) boobies and swallow-tailed gulls nest. The giant tortoises migrate back to the highlands and the Galapagos sea lions give birth. 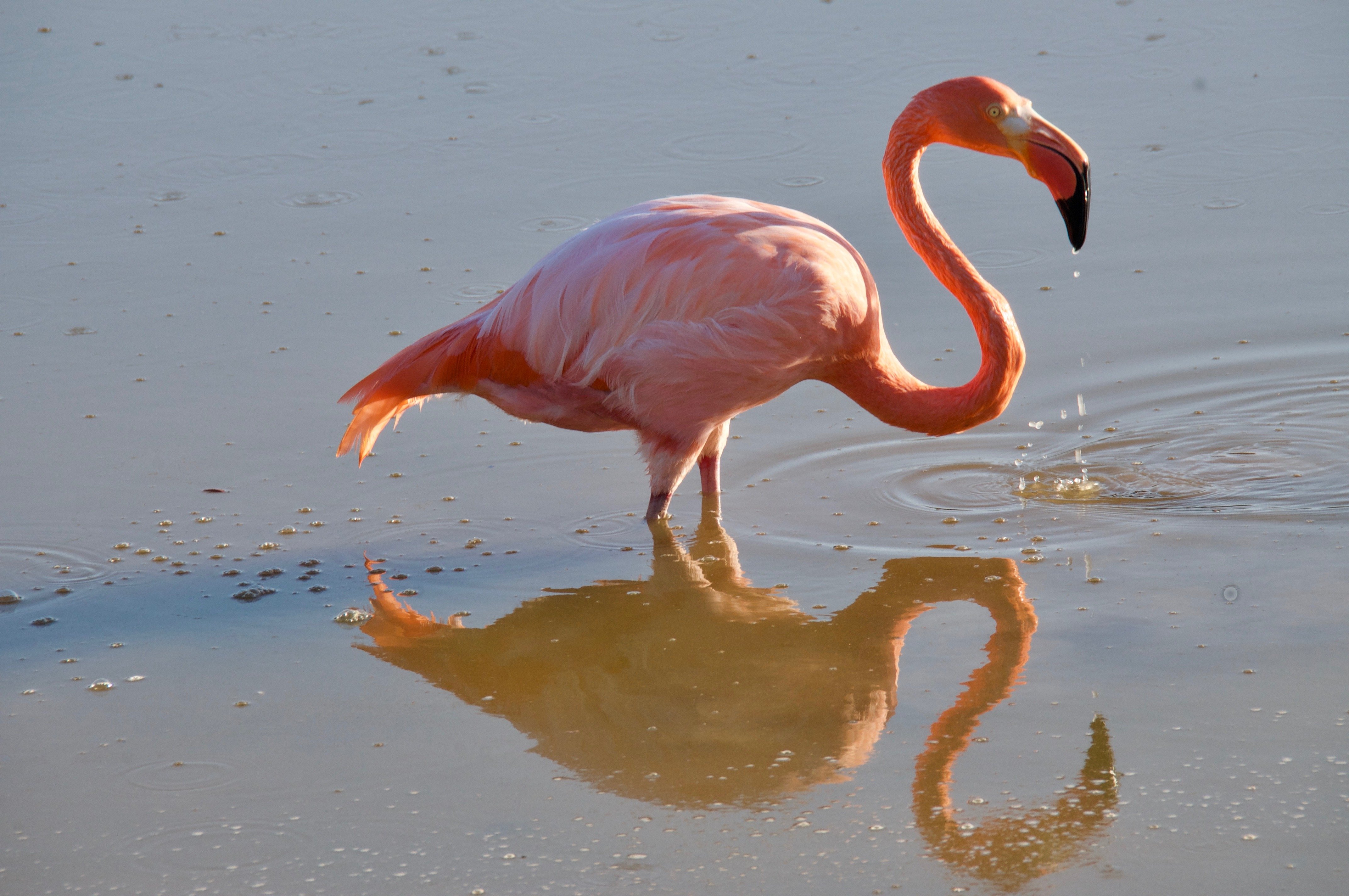 September is the peak of the dry season and when the Galapagos penguins and sea lions become very active. Swimmers and snorkelers can be delighted with penguins active at the surface or torpedo-like while underwater and shore-fighting is common among the male sea lions.

The Galapagos fur seals mating season begins in October and the Giant tortoises are still laying eggs. It’s a great time to spot Blue-footed boobies as they raise chicks all over Española and Isabela.

Some species of jellyfish can be seen around the islands in November and the seas are calm as southeast trade winds have decreased strength, allowing the water temperatures to slowly rise. Great water visibility for snorkelers and Sea lion pups (specially at Champion Islet) will play aqua-aerobics next to you, even curious enough to nibble at fins of snorkelers.

December kicks off the start of hatching season for giant tortoises, with this lasting until April. You’ll see young albatross chicks as they’re big enough to fly now, and you may encounter boobies fishing, an uncommon sighting though still possible! 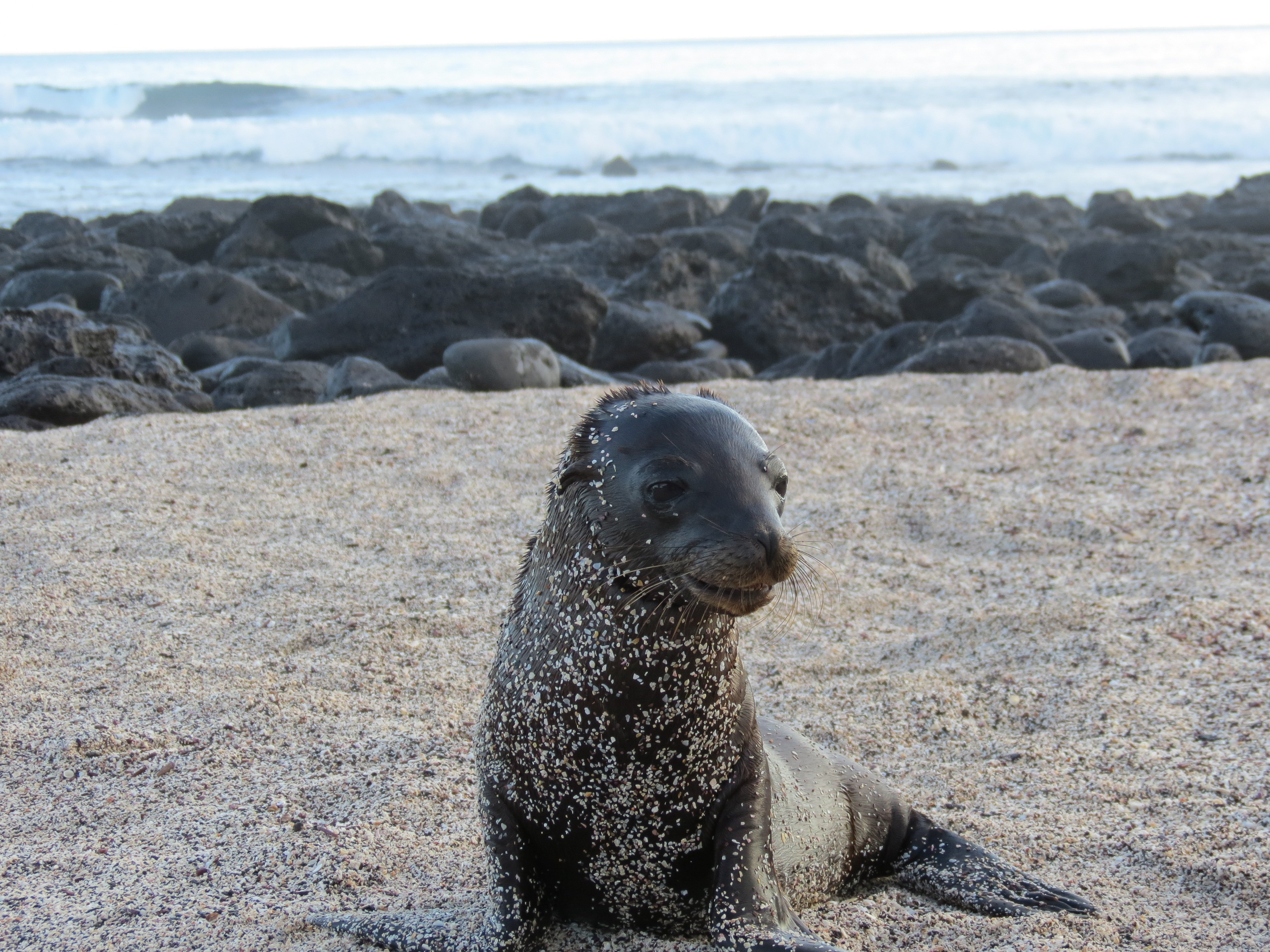 Galapagos Sea Lion
The Galapagos Sea Lion is by far the most playful and curious of all the animals. They populate many of the sandy beachs and rocky shorelines and they love to bark and bey.  Endemic to the islands and a closest relative is the California sea lion, their diet consists of fish and squid. Males can weigh up to 250kg (550lbs) with one head male for a group of females or a bachelor colony of resting or retiring males.
Fun Fact: Pup sea lions are coralled in 'nurseries' until they’re ready to take to the open waters. 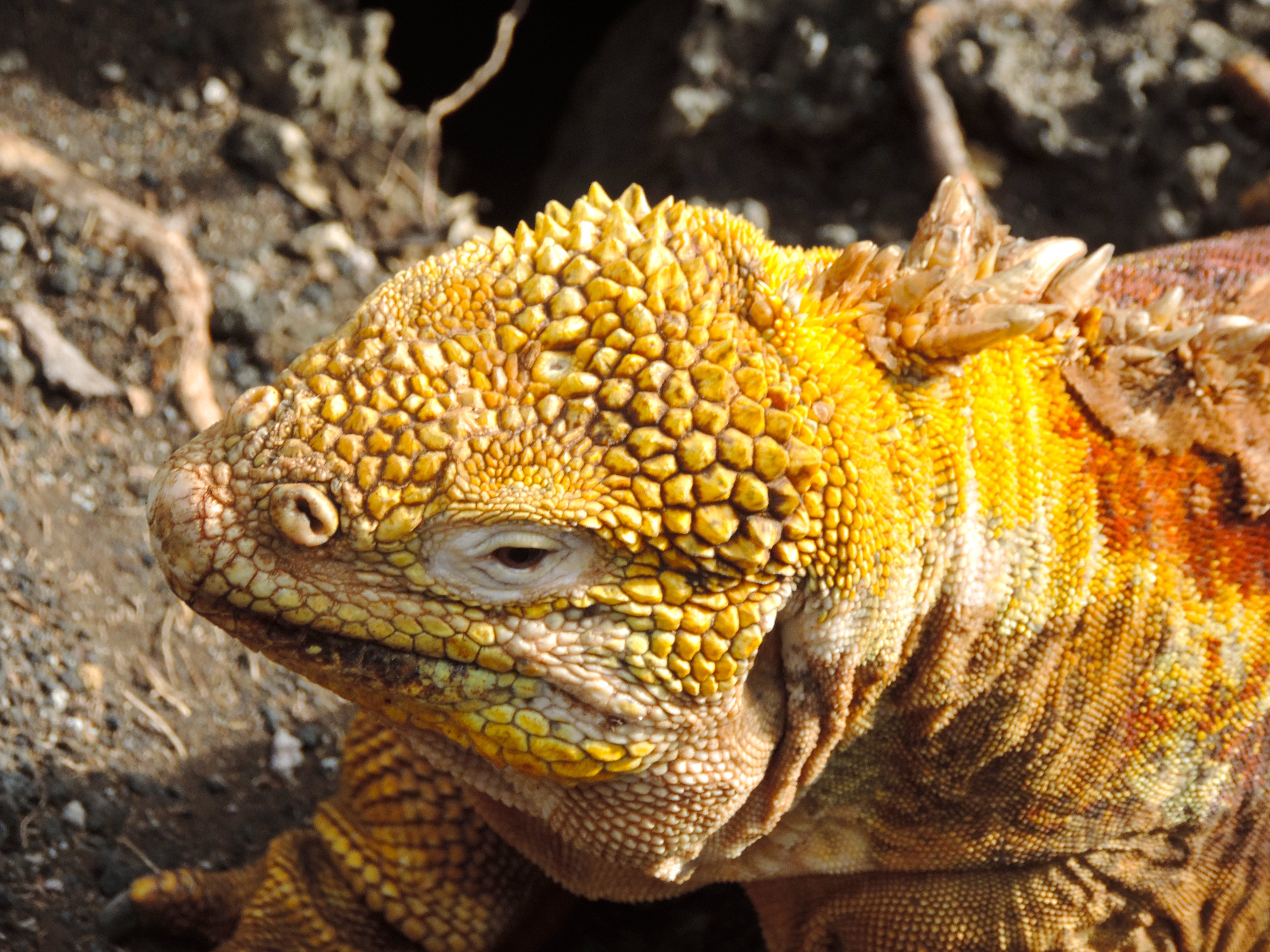 Marine Iguana
Descendants of a land iguana from the mainland of South America, marine Iguanas can live upto 25-30 years and can grow to one metre in length. Apart from breeding season when the males take on a green and red coloration, iguanas are normally a sooty black color. They feed on algae at low tide and can dive up to 20 meters (60 feet), spending as much as 60 minutes underwater.
Fun Fact: Marine Iguanas are the only sea going lizard in the world! 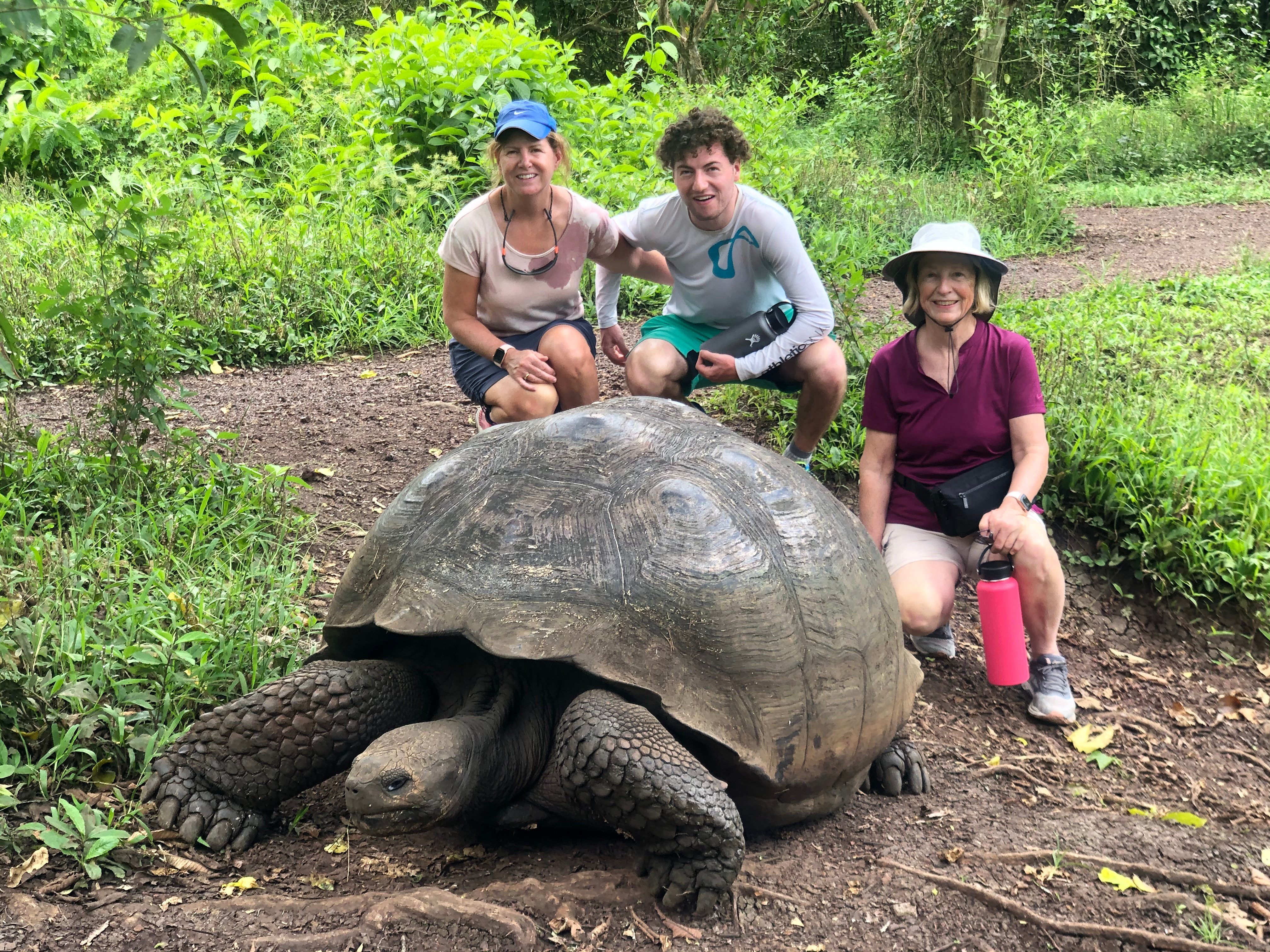 Giant Tortoise
Tortoises can live over 100 years though no-one is exactly sure how long they can live as they outlive humans!  They can weigh upto 300 kg (650lbs) and are vegetarians, with their diet consisting of over 40 different plant species and they’re the only animal in the islands that can eat the fruit of the Poison Apple Tree.
Tortoises have two main shell shapes: saddle-back and dome-shaped.  The shape of the shell, or carapaces, is thought to have evolved due to the specific environment and type of vegetation available.  The raised front of a saddle-back shaped tortoise allows their long necks to reach higher for vegetation on the drier islands.  The dome-shaped tortoises can push through the dense growth found in the more lush areas where food is found closer to the ground.
Fun Fact: When tortoises are frightened, they retract into their shell and air is expelled to make room for their head and legs, making a hissing sound.

The world-famous Kruger National Park is one of the biggest…

The best time to visit Botswana

Botswana is a sub-Saharan country with attitude and beauty to…

Top things to do in Mount Aspiring National Park

Mount Aspiring National Park is a hiker's paradise and a…

A short look at some highlights from our comfort-focused Elegant…

The Best Way to Explore the Galapagos Islands

There are dozens of tour companies out there offering Galapagos…

The 'Rimu' is our signature New Zealand trip. 14 days…

What to Expect From Your Milford Sound Cruise

Whether you've arrived into Milford Sound under your own steam…

Manukura is a white kiwi bird - the only known…

Why we Love our New Zealand Birds

We love our New Zealand birds at Active HQ! You may…

The Seven ‘Wonders’ of the Galapagos: Best Things to Do and See

As individuals who thrive on adventure, we love to travel…

The Top 4 Things To Do In The Peruvian Amazon

Stretching 96,922 square kilometres across the country, the Amazon comprises…

Top 10 things to do in Iceland!

Are you a keen explorer? In the market for a…