Discover the Most Famous and Lesser Known Inca Ruins in Peru 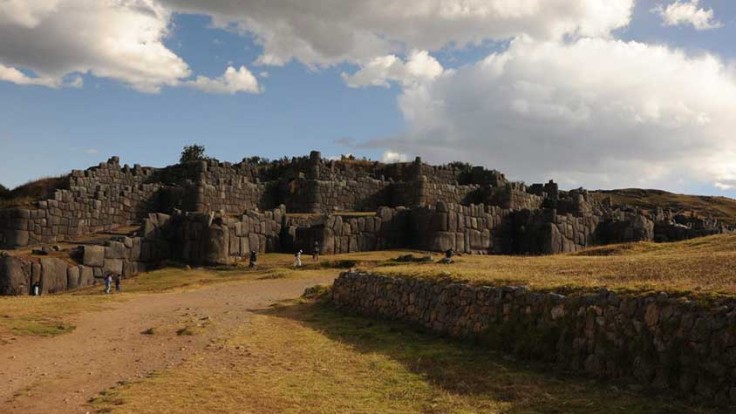 Over 500 years ago, the Inca Empire built a road system that consisted of 40,000 kilometres (25,000 miles) of trail spanning north to south through Chile, Ecuador and Peru. This Inca road system connected villages throughout the Andean mountains. 500 years later, we see a living testament to the engineering capabilities of the Incas, as we see perfectly preserved homes, farmhouses and fortresses throughout Peru. But not only have the buildings stood the test of time, but so has the Inca road system… commonly known today as the Inca Trail network.

Machu Picchu – the most famous Inca Ruin in Peru 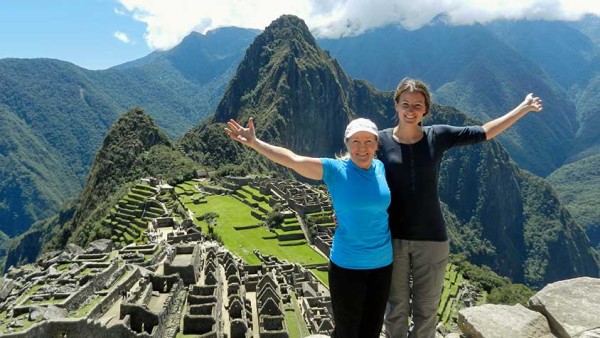 Without a doubt, the most famous of Peru’s ancient Inca Ruins is Machu Picchu. Hiram Bingham’s discovery of the ruins in 1911 shot it to fame and in 2007 Machu Picchu became one of the new Seven Wonders of the World… while hiking the Inca Trail or Lares Inca Trail has become one of the greatest hiking experiences in the world.

The lesser-known ruins of Peru:

Translated to 'House of the Sun', the Sacsayhuaman Fortress is situated on the hillside overlooking Cuzco’s main Plaza and Cuzco Valley. This magnificent archaeological site represents a set of jaguar’s teeth with massive, perfectly fitted stones weighing up to 130 tons each, and was the place where the Incas made their final stand against the Spanish conquistadores. No one really knows what the Incas used Sacsayhuaman for – some say it was a sanctuary and temple of the sun, others say it was a granary. No matter who’s right, you’ll have a lot of fun hearing all the stories this amazing area inspires. Visit it on our 'Jaguar' and 'Iguana' trips.

Formerly the royal palace of Emperor Pachacuti, this palace and fortress also served as an Incan stronghold as they resisted the Spanish conquistadors. Remnants of storehouses, quarries, terraces, and temples are still incredibly well preserved today. It’s arguably among the most impressive ruins in the Sacred Valley and it's situated near the starting point of the Classic Inca Trail. 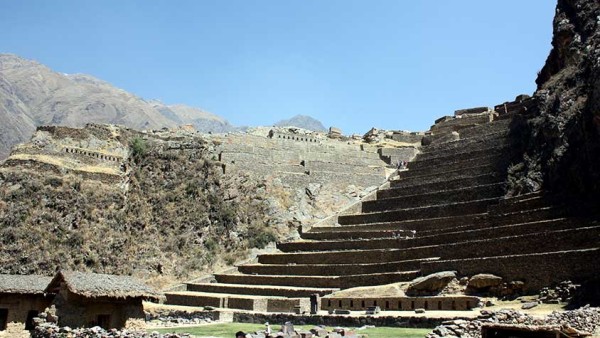 Pisac is a village situated in the Sacred Valley. The name Pisac (sometimes referred to as Pisaq) means partridge (a type of bird) in the local Quechua language. It was customary in Inca architecture to design cities in the shape of an animal, and in the case of Pisac, it’s built in the shape of a partridge!

The other main attraction for visiting Pisac is to hike to the Pisac Ruins, which sit high above the village on a triangular plateau – you can find the start of this trail near the church in town. It’s a steep 610 meter climb (2000 feet) but the views of the Urubamba Valley, the close up detail of the terraces, the ancient footpaths and tunnels make the climb well worthwhile. You can hike to the Pisac Ruins on our Ultimate Peru Adventure 'Jaguar' and 'Iguana'  trips. 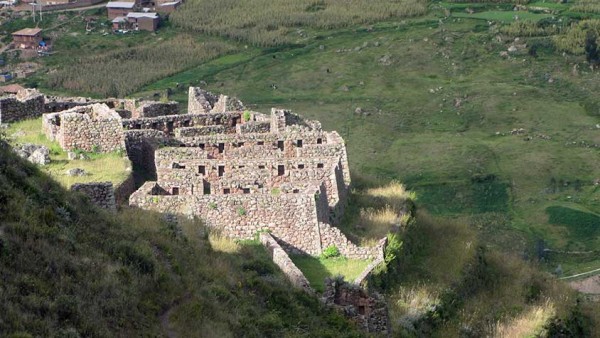 This unique oval structure is sometimes colloquially known as the “Egg Hut”. It’s believed to have been a kind of rest stop for Incan travelers (called a Tambo) providing them with a place to spend the night and rest their animals. You’ll discover the Runkuracay ruins on the Classic Inca Trail hike to Machu Picchu; it is the perfect place to enjoy a mid-hike break and marvel at the beauty of Incan architecture. 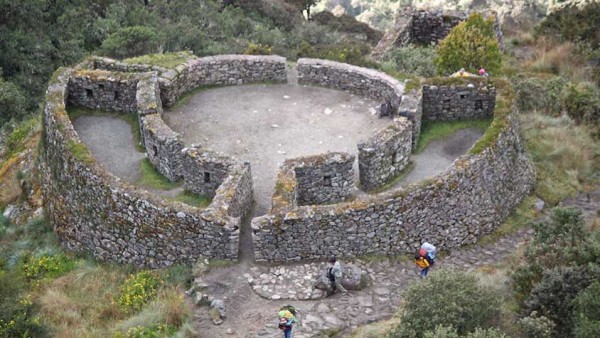 Dubbed “La Ciudad entre la Niebla” (“The City above the Clouds”), this major archeological site is situated a staggering 3,720 meters above sea level. Contrary to its nickname, Phuyupatamarca is often surrounded by dense, white clouds. The ruins, dramatically constructed into a steep cliff-side, contain five stone baths that fill up with freshwater during the rainy season. It’s believed that these baths were used for religious ceremonies back in the Inca times.

Visitors can also check out the site’s elaborate hydraulic system, a true testament to impressive capabilities of Incan engineering. Of all of the Incan ruins in the region, Phuyupatamarca is arguably the most intact and therefore a truly spectacular site for trekkers passing through.

First discovered by Hiram Bingham (Bingham also discovered Machu Picchu) when he wandered along a road extending from Machu Picchu, the dramatic Sayacmarca is situated at a fork in an old Incan road, in a dense subtropical forest full of butterflies and hummingbirds. Quechua for “Dominant Town,” these unique ruins have a mystical air about them and are among the most impressive along the Classic Inca Trail (except for Machu Picchu itself, of course!). It’s believed that Sayacmarca was actually built by the Colla, a major enemy of the Incas, and that the Incas took over the site following their conquest of the group. 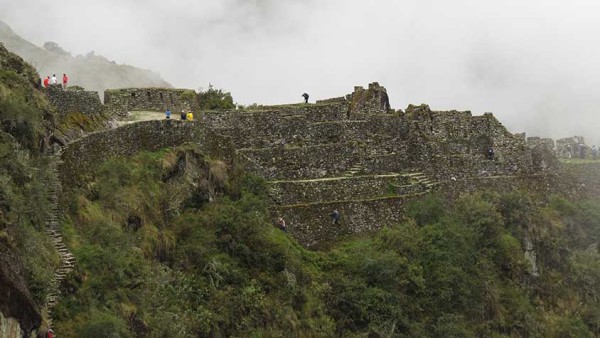 Huiñay Huayna (traditionally spelled Wiñay Wayna in Quechua, the language of the Incas) was constructed into a steep hillside overlooking the Urubamba River. In addition to the site’s ancient houses and temples, it also boasts an incredibly complex system of Incan terraces, formerly used for agriculture. The name of the site roughly translates to “Forever Young,” and many trekkers report that these ruins are the most beautiful found along the Classic Inca Trail.

The endpoint of the first day’s trek along the Classic Inca Trail, Wayllabamba (which means “grassy plain” in Quechua) is the perfect spot to watch the sunset behind the dramatic Andean peaks. This grassy plain overlooks stunning Andean scenery, with centuries-old Incan terraces winding through the surrounding mountainsides. There is even a village nearby where travellers can mingle with local villagers. 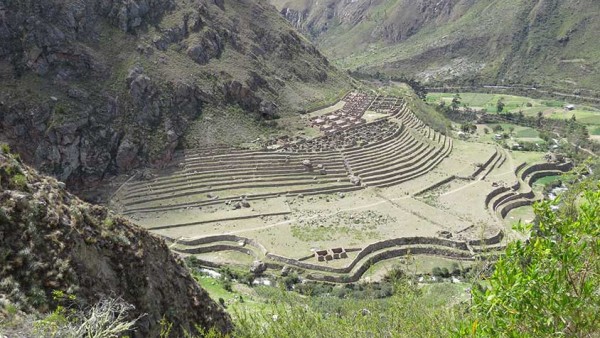 So, when is the best time to visit Peru?If you're…

W Trek Patagonia – Everything You Need to Know

Adventure Travel to Costa Rica: Everything You Need to Know

With coastlines on both the Pacific Ocean…

Podcast: Harry Dickens talks with Kit about his 'Jaguar' adventure, including Machu Picchu

What a great experience“Active was so organized. Every day was…

Podcast: Sue Brickey and Rick Pope talk with Kit about their 'Chinchilla' adventure (Part I)

More Than I Expected“I only did three days of the…

A varietal overview of Bolivia

“Such a diverse opportunity to experience…

Best Things to Do in Cuzco, Peru

The ancient Inca capital is said to have been founded…

Constructed by the Incas over 500 years ago, the Lares…

Hiking the Inca Trail to Machu Picchu: Your Ultimate Guide

One of the most popular hikes in South America, Peru’s…

Inca Trail vs. Lares Trail: How to Get the Most out of Your Adventure

As you plan your trip to Peru and to Machu…

Considering a bucket list trip to Machu Picchu but unsure…

How to Get to Machu Picchu: Everything You Need to Know

So, the once-in-a-lifetime trip to Machu Picchu is beckoning your…

Discover Machu Picchu, The Most Famous Inca Ruins in Peru

Peru has so many ancient ruins, villages imbued with an…

Discover the Best Things to Do in Lima, Peru

Top 10 Things to Do in Peru During Your Trip

There is so much to see when visiting Peru, it…

Sorting out Patagonia flights and Patagonia travel doesn't have to…

With years of experience in the travel arena under our…

The culture and customs in Bolivia are unique and have…

La Paz, also known as ‘the city that touches the…

Basic Facts About the Galapagos Tortoise

The Galapagos Islands are named after the giant tortoises that…

5 Best Islands to Visit in Galapagos

The Galapagos Islands are an adventures dream with plenty of…

Best Things to Do in Quito, Ecuador

If you're planning an Ecuador holiday, you'll be visiting the…

The Galapagos Islands is an internationally renowned diving destination home…

Dreaming of a Peru adventure? Our 'Jaguar' is our signature…

Everything You Need to Know Before Travelling in Patagonia

Patagonia has an almost surreal quality to it so it's…

7 Surprising Reasons South America in Winter is a Must-Visit

Looking for a better way to spend your winter instead…

So you like to be active, huh? That’s totally cool…

Are you about or thinking to head out to Peru?…

6 Travel Apps You Absolutely Need When Travelling in South America

The smartphone has quickly evolved into one of the most…

6 Peruvian Words You Should Know Before Your Machu Picchu Adventure

Because of its role as an international tourism destination, it’s…

12 Peruvian Festivals, One for Each Month!

Perhaps you've read somewhere or other that there are over 3,000…

The 7 Peruvian Drinks You Can't Miss on Your Trip

Just as Peru is a land of diverse and delicious…

Inca Trail Packing List: The 12 Most Important Items and Why

You've done it… You've finally decided to go hiking the…

7 Things to Know About Traveling to Peru

Sometimes surprises when you're travelling can be good - a…

We've been running trips in South America for over a decade…

The Top 20 Things to Do in Peru - That Aren't Machu Picchu!

Let's be honest - it probably shouldn't come as much…

Peruvian Food You Can't Miss on Your Machu Picchu Trip

There's a lot to get excited about when it comes…

Facts About Machu Picchu To Outsmart Your Tour Guide

Peru is bursting with ancient ruins and villages built on…

My flight was booked! My dream of hiking the Inca…

Things to Do in Machu Picchu: How to Get the Most out of Your Experience

Although it's one of the most well-known archaeological wonders of…

The Galapagos Islands and wildlife are synonymous – you can't…

The Classic Inca Trail to Machu Picchu: A Photographic Journey

It was around the early 2000's when we started exploring the…

The village is perched high in the mountains and surrounded…